We’ve got a fantastic interview with someone truly inspirational today. Her name is Cher Melsom and she’s that perfect combination of adventurous, funny and totally courageous.

1. To start with, please tell us a bit about yourself.

My name is Cher Melsom and I am currently 43 years young. I have been a single mommy of 4 children for over 13 years. I’ve had many jobs in that time – teaching assistant and youth offending officer have been the biggest ones. I had to leave work 7 years ago due to my illness. Once I had come through the worst of the treatment, I then went back to college to study performing art and so now I am currently an actor.

Acting has been a passion of mine since I was in school. When I left school, I worked at Butlins in Minehead where I met the father of my first child. I then left to have my child and that’s where my life got put out on hold as being a mother became my world. My family grew and as they did that’s when I went to work in schools. Then came the youth offending. And at that time my kids and I were living in Cornwall. In 2013, I was diagnosed with my cancer. That’s what brought us home again back to Lichfield in Staffordshire, where all my kids were born… 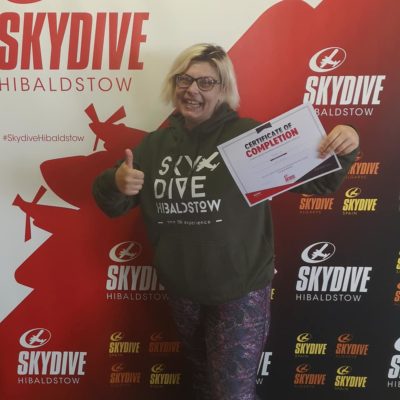 2. How did you get the idea to do a tandem skydive?

So the idea for the tandem skydive came when I was writing a bucket list after my diagnosis and we had moved back home. I was organising guardianship and my funeral and had realised there was so much more I wanted to do with what life I had left. Writing the bucket list was harder to write than arranging my own funeral. Which may seem strange but I am at peace with dying.

However, I wasn’t at peace with heights. And to be able to do a skydive, I kinda needed to overcome that somehow… So I added a balloon ride to my list hoping this would help. I also had things like 10 selfies with 10 celebs, swimming with dolphins and lots more cool stuff, but my biggest tick box, was my skydive. I had often dreamt as a child I was flying. I used to be bullied a little in junior school and I would dream I was been chased at night. I would run then just jump n fly. Sounds crazy I know, but that’s what made me determined to do my first skydive.

3. How much did you raise on behalf of Balls to cancer?

I’ve managed to raise just £1000 so far for Balls to Cancer. Just by doing the dive. I have more donations still coming in.

4. Did you at any point think skydiving was a dangerous thing to do considering its an extreme sport and considering your illness.

I’ve always thought that jumping out of a plane held such dangerous risks if I’m honest and with having cancer the risk for me to do it would be even higher… Due to my cancer been incurable there always a risk of it coming back. My secondary was diagnosed 3 years ago and I am now 2 years post-treatment. In my mind, I just see it like this. I would rather do things in life I love living whilst my cancer is still sleeping.

It’s going to wake up again eventually so rather it awake by me living life rather than sitting around waiting for it to happen… I am fully aware of my own risk to my health and my oncologist is happy I am aware of it and is happy for me to still do it.

My view of the dangerous side of skydiving now has totally changed since doing. My own health risk aside this is the best thing I have ever done. I used to think I was a water baby, but I am now a high-flying babe! Everything we do in life has an element of danger, but strapping a parachute on is probably one of the safest things to do.. I might even do an Accelerated Freefall course next if I’m honest now.

5. Is this your first extreme sports adventure?

I actually thought going up in a hot air balloon was extreme until I did the tandem, but I now I know different. This has been my very first extreme sport and I am so happy I have done it. I went up in that plane one women with certain expectations of what to expect, and I came down a totally different women with all my perceptions changed. It’s the best exhilarated experience I’ve ever had and anything like this that leaves you wanting more is only a good thing.

6. We’d love to hear about some of the other items on the bucketlist that you’ve done recently?

So as I’ve mentioned I went up in a hot air balloon. I hated it. The view was amazing but the unsteady feeling under your feet just makes you feel unsafe, insecure and dangerous. You have nothing but wind/air to keep your up.
I love taking selfies and so wanted to try and step the selfies game up and added that to my list to try and get 10 selfies with 10 celebs. This wasn’t something I actually thought was reachable but boy was I wrong. When my favorite 90s band announced they were getting back together, I was all over it to try get myself a ticket to there reunion tour.

The tickets went on sale and I tried so hard. Had every device I’d got waiting to get through but tickets sold out so quick n so I never got a ticket. I was so emotionally upset about this that I did a vlogg on it. I used the song titles of the bands songs though as it’s expressed my emotions of disappointment alongside my cancer journey. This was the point I added my bucket list for the first time online as well…. A couple of hours past after I’d added my blog on line then my phone went nuts. I was getting tweets and messages from people who wanted to help me get a ticket to see Bros.

Then guess what – Matt Goss’s manager had seen my vlogg and arrange for Matt to call me! To say I was on a total high was an understatement lol. He then invited me to the Dorchester hotel for the night and took me to the John Athan Ross show to help me fulfill 10 selfies with 10 celebs on my bucket list.

I also managed to finish writing my book titled 40 Shades of 1sts.

7. When you heard your diagnosis of ovarian cancer, did it change your outlook on life? Do you think you would ever have skydived without the diagnosis?

I’ve always wanted to get into doing extreme sports after watching Jack Osborne Adrenaline Junkie. But I would just talk about doing it. After been diagnosed with cancer, it changed my perception on the meaning of life. You can’t just sit around talking about living, you have to go out there and do it. Before my diagnosis, I think I would have just stood around talking about doing a sky dive and wanting to do it, but wouldn’t of actually done it if I’m honest.

And that what I have to thank cancer for the motivation to go do things.

8. Can you describe what the freefall was actually like to someone who has never done it before?

My freefall was exhilarating and euphoric. It made me feel free and totally alive again, I just didn’t want it to stop. I realised in that moment how safe and secure I was doing it. I think I even got a little emotional with an uncontrollable feeling of relief and like I’d been reconnected with my soul again. Hence going up one women and coming down another. Once my tandem instructor, Brad had opened the parachute, it was the most peaceful and serene moment I had experienced.

9. Will this be your one and only skydive do you think?

It will not be my only dive. I have to overcome my fear of ascending in the plane because if I’m honest, that’s the scariest bit for me. But to actually reach the freefall is worth it. Once Brad and I had left the airplane, I was absolutely fine. So yes, I will be back to do more and to your dropzone.

10. Do you have any advice for others thinking of making a charity skydive?

Fundraising isn’t always an easy thing to do. People will give donations as everyone thinks it’s a dangerous sport. It’s always best to have a good written story for fundraising and use social media to its best advantage. My tip is to set up a JustGiving page and then share with all forms of social media. Life is full of limitations eg. age, illness, disability. Don’t doubt your capability to succeed in doing anything in life. As long as we all have a heartbeat and air in our lungs, we are capable of doing what we think is impossible.

I think everyone should experience a tandem skydive at least once in their lives. If you’re broken it will fix you, if you’re down it will lift you, if you’re lost it will find you. Skydiving is just so worth doing and as a cancer patient who was petrified of height, becomes really nauseous and hates plane take off, and only had 6 to 12 months to live 6 years ago, I can honestly say from my experience, this is the safest, most epic thing I’ve ever done in my life. We are all worth that true feeling of being alive…