We’re very proud this year to be sponsoring national champions, team NFTO. They fly the flag not only for female participation in 4way, but will also shortly be representing Team GB at the World Cup in a couple of months time. We thought it was high-time for catchup and chat: 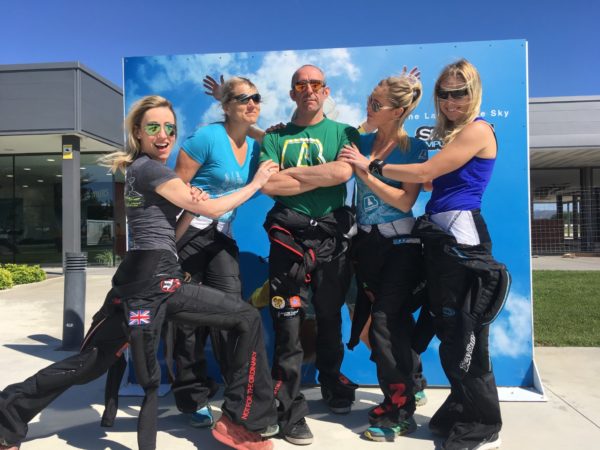 1. How did you become a Swallow Group sponsored team?

Anna: Through hard work and persistence ?. To become a sponsored team in any sport, one usually has to be performing at a high level, and so to get us to the stage where we were offered some DZ sponsorship, we had to prove our worth in both our performance and being good ambassadors for sponsors. After some chats and negotiations, we are delighted that we are a Swallow Group sponsored team, training at both Skydive Algarve and Skydive Hibaldstow.

2. How is training going this year?

Sian: Training is going very well so far this year. We started the season indoors basing ourselves at Twinwoods Adventure just prior to the Bedford Challenge and World Indoor Championships in Lille. Due to Work commitments spreading us all around the globe over the winter, we had to cram all of our winter training into an intense couple of weeks at the beginning of April. And the hard work paid off with a shiny Silver world medal and a new team PB of 27.8 indoors.

Since then we have managed to do an outdoor training camp every month. The first camp was with coach Gary Smith with the main aim being intro to new line up (welcome Kate into the Sky!) And the secondary aim of doing some Otter training which we need for the World Cup in October.

The next two camps have been a great success at Skydive Algarve with coach Roy Janssen. We have made small but very successful changes to lots of our exits and tweaked our block techniques too. We plan to do another camp at Skydive Hibaldstow just before the UK Nationals. And then finally, we will follow on with yet another camp in Portugal before heading out to Eloy for the World Cup!

3. This year you have a new / additional coach in the form of Roy Janssen. How did that come to be and What does he bring to the table?

Vana: We must be the luckiest team in the world to have the opportunity to work with two exceptional coaches. This has come about due to availability issues but has worked out really well. We basically worked with Gary for the indoor part of the season and our first outdoor camp and have been working with Roy since May for the outdoor camps and some indoor training. Roy is a very experienced skydiver and coach and has some valuable knowledge to pass on. He has some slightly different focus points and is equally invested in the team and genuinely wants us to be the best we can be. 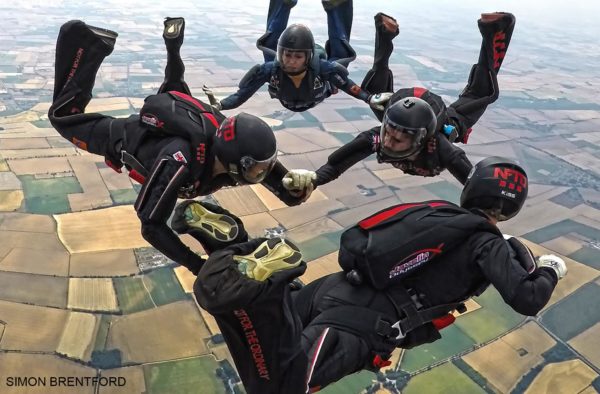 Kate: Block 1 is a relatively straight forward block involving 2 side body piece partner spins. There are however 3 types of technique being used, what’s the best option?. There is the option to cog with the back piece going through first, the cog with the front piece going through first or both going at the same time with the vertical from the OC. This obviously leads to the inevitable bruises in training from the collisions of legs, maybe knee pads would be a useful investment when you first start learning this block. We have played around with all 3 options and currently opted for a cog with the front piece going thought first which is working out well for us at present, however, our coach will always be looking at how our block times are doing against our competitors so we haven’t set this in stone.

The exit has also been an exciting trial for the team, it’s not really that similar to anything making it an interesting trial of funnels and 2 separate pieces flying solo in the sky, but we are getting more consistent with it.

Block 13 throws up a different technical dilemma. Mainly how much risk do you take based on the bust potential? The vertical/side slide move from the centres at the start of the block appears to show the fastest block time on the clock but from what we have seen in the tunnel competitions so far leads to a high level of bust potential on the build with the grips not as clearly visible to the judges and has cost the top teams some vital points at the world events. There is also the option of high grips and low grips and an open accordion-type set up for the point and tail or a sidebody picture to start. Whatever the technique used the key to this block we have found is clearly presenting the grips at the start of the block and having good synchronisation. The 13 exits we have found to be easier to perfect as it a bit of a cross between an open accordion exit for point and tail and a 16/12 exit for the centre pair.

We will miss the glory 1 exit on the hill (not sure about Simon on camera you will have to ask him his opinion on the new vs old exits) but it’s definitely exciting to have a change to the dive pool and the blocks have provided lots of fun trialing all the possible technical options.

Simon: Personally, I loved the old block 1 on the hill. Partly because I was good at it and partly because it looks great when launched well on the hill. As for the new exits, I’ve only done a few, but so far, so good. To really learn how they flow, will take quite a few more jumps I think.

5. If you had to name 3 words or phrases which describe a good teammate, what would they be?

Anna: Dedicated, great interpersonal skills, and a good skydiver! (And having the time and money is pretty essential for a committed team too!)

Vana: I would have to say – hardworking, dedicated and considerate.

Simon: Focused, compassionate, a person cable of playing the long game. I think being able to play the long game is what brings success. It takes years of commitment to see the improvement in points average, the development of reputation in the sport and the opportunity to shine.

6. Lastly, do you feel any pressure coming up to the UK National Championships in a few weeks time?

Simon: Pressure is a relative word and a position which changes second by second dependant on many situations. Of course, we want to be national champions again and the highest-ranking female team, so loading pressure on ourselves is probably going to happen at some level or other. But we are all seasoned competitors, therefore we know the value of enjoying the competition environment and that produces good results as well.

Going from round to round, there are the added influences of what happened in the previous jump, what our competitors did, what the judges saw, what blocks or randoms are on the next round. Then there are the external pressures as well – such as how much sleep we got the night before, have we been waiting a long time for a weather hold, are the weather conditions optimal, etc.

Do we feel pressure? A bit, but we also enjoy the nationals experience immensely!