Gerry has been a part of the Hibaldstow community for the past 2 years. He has steadily been adding to his qualifications and is a friendly face on the dropzone wether you are a tandem skydiving customer or in need of some parachute rigging. He has recently been appointed the rigger at the dropzone. Read his interview here. 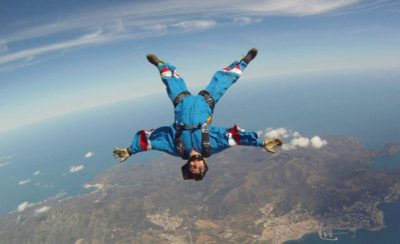 How did you start skydiving?

While on a trip outside the wire in August 2003 during my service in Northern Ireland, Lori(now my wife) took us past Wild Geese Parachute Club, a mere 3 miles from her parents home. I mentioned always having wanted to do a skydive and Lori said her family knew the owners. We popped in for a chat, and 3 days later I was doing a RAPS course (it helped that I was in charge of planning on the Squadron)! I got the bug, and the rest is history.

When you left the RAF, what made you decide to pursue a full-time career as a rigger in skydiving? 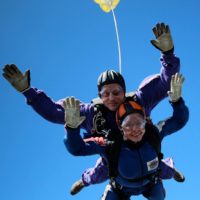 Firstly, I doubt I’ll ever be a full-time rigger. I have no idea how such people make a living. Initially, I began working as a Forensic Collision Investigator, looking into car insurance fraud. My aim was to simply do a bit of skydiving at weekends to fuel my adrenaline lust, and earn enough money to make my hobby cost neutral. When, in April 2013, the government brought in legislation that made it cheaper for insurance companies to pay out than to investigate fraudulent claims, I decided to walk away from the business. I was lucky enough to get a bit more work from Hibaldstow during the week and most weekends so didn’t have to worry about getting a proper job….you promise you won’t show this to Lori, don’t you? Anyway, by this time I assumed I’d begin work as a trainee maths teacher in January 2014 on the Troops to Teachers Scheme, so was quite happy with the ad-hoc nature of my work. When Troops to Teachers were unable to ﬁnd me a school match, I was hit with an 8-month delay, so I asked James about some more structured working hours. I’ll be working at Hibaldstow during the summer skydiving and in the rigging room. Of course, if I’d said to Lori 2 years ago that I was swapping my military salary for a “Cutaway” existence as a full-time skydiver, there may have been one of those one-sided discussions which only loving wives are able to instigate. However, with a little procrastination, hope and patience, I appear to have landed my dream job!

Do you think your military background adds any value to your new job as a rigger?

I think my experience adds value to all aspects of skydiving. I spent 24 years flying a mixture of fast jets and helicopters. Aviation risk management and flight safety were by¬words for my job as a navigator, flying authoriser and instructor, and I consider them to be just as relevant to skydiving. My interest in flight safety equipment (including parachute systems) was fired when I first became a Combat Survival and Rescue Officer, and it was that enduring interest which eventual led me down the path to becoming a rigger.

You have a family. Do you ever consider a full-time careering an extreme sport as being a significant risk to them? 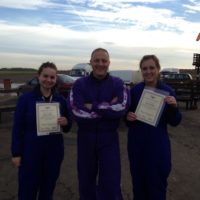 No! I am always evaluating risk. I am often the first to take myself off a load if things don’t look right. Whether it’s the weather conditions, my physical condition / tiredness, the type of jump and experience of those around me, or emotional distraction, I will take myself off a lift or take a day or weekend off at the drop of a hat. If I ever feel the risk has become too big to justify, I’ll walk away. I know you can never eliminate all the risks, but I feel I have covered as many of them as is possible. Whilst on the subject, I think it’s worth remembering that risk brings reward. Apart from my family, nothing brings me more happiness than skydiving. The life-enrichment that skydiving brings (and the camaraderie that goes with it), has a direct and positive effect on those around me, especially my family.

You now have your CSI, Tandem and Rigger ratings. Do you have plans to get your AFF rating as well?

I am currently booked onto the AFFI Course in April 2014, so fingers crossed. I am also hoping to become an Advanced Rigger next year.

When you are not doing work skydives, what type of fun-jumping do you enjoy?

Most of my fun jumps over the last 6 or 7 years have been head up freely jumps, although did the tunnel scrambles in Empuriabrava last year and may have almost talked myself into some 4-way soon. All I need to do is find a bunch of rookies who want to have some fun which isn’t going to cost me a small fortune in the tunnel; I’m just not sure my (almost) 50-year-old frame will stand up to the sort of training regimes everyone seems to be committing to these days.
I’d also like to try a bit of wingsuiting and canopy formations if I get the time. 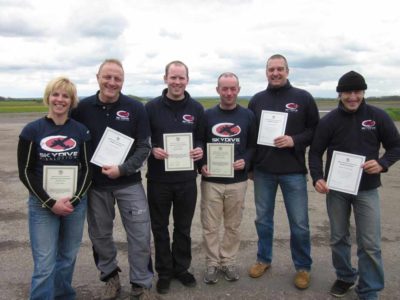 Do you have any interesting or funny stories about any of your skydives?

While at the afore mentioned tunnel scrambles, we had begun the final fun round of competition which involved a figure of eight relay. I was on a team with Hibaldstow’s own skydiver of the year Kathryn Campbell, Empuriabrava’s free ﬂying goddess Crissie Dieling, and Belgium’s world champion Andy Grauwells. Now, anyone in the know will have realised that these three added together weigh about the same as my legs, so I’d put on my slowest suit. I’m reliably informed the jumpsuit is a “Joyce Cooper Super Swooper” from the early seventies.

Anyway, I entered the tunnel for my first solo attempt at the figure of eight and the crowd went crazy. I knew the suit was “draggy” but couldn’t believe how far away from the net I was (this had never been a problem before!!). However, from this elevated position, I had a good view of the spectators, and could see many of them waving, applauding and laughing.

This filled me with confidence, and I reflected on what a great coach Andy had been. Not only had he turned me into a crowd pleasing skydiving god, he’d also single-handedly fixed my fall rate problem! I arched with every fibre of my being, finished the job and strained to get down to the level of the door. It was only after being physically assisted through the door of the tunnel after my epic performance that I realised what had caused such a stir. I’d been flying with a 6-foot, ZP-lined balloon on my back, having failed to do up the zip! How the mighty fall.

Lastly, outside of the sport, describe a typical day?

I can usually be found trying to teach myself piano and guitar, and occasionally a bit of Spanish or Russian. I also enjoy taking the family swimming and helping them make Star Wars stuff with Lego. Failing that, I’ll be helping to man the phones at Samaritans.