To say we are proud of our sponsored teams at the recent World Championships is an understatement. We’re really proud of how they all did, representing not only their countries but our dropzones as they bid for world level medal glory. So here’s a quick review of our teams and how they all did:

The Hayabusa boys have been at the top of their game for many years now and have been unbeaten at World level for 3 championships. And they did it again with not only a new world record (62 points in time), but a new world record average too of 27.9. This year they’ve done close to 600 training jumps, many of which were at Skydive Algarve out of our trusty Texas Turbines Conversion Grand Caravan aircraft. At the end of round 9, it was a nail-biting even scores between them and long-time rivals USA’s Airspeed. Both had good rounds, but Hayabusa took a decisive 2 points to raise the sword. Well done! 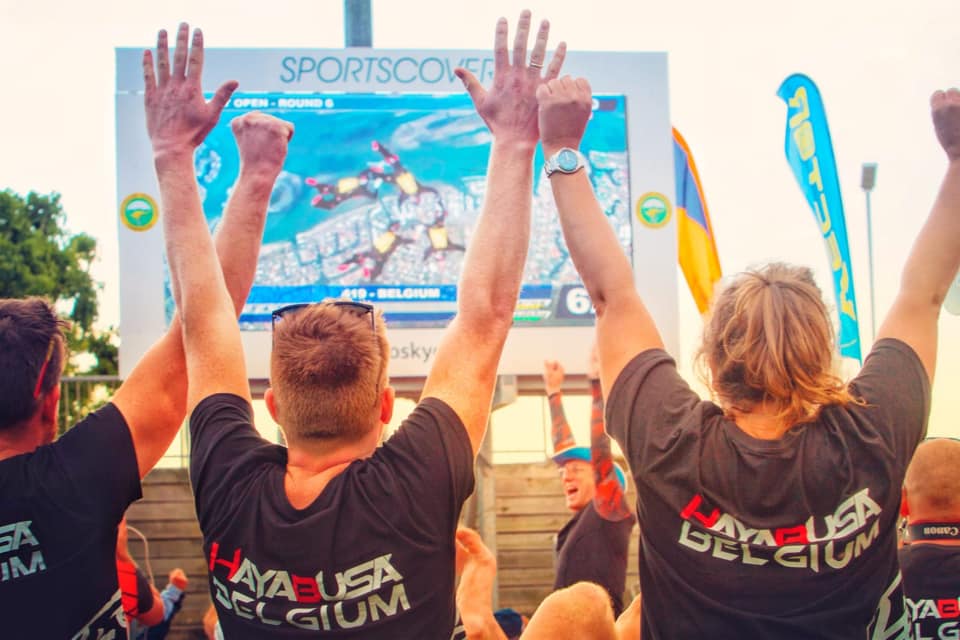 Here’s Andy and Nana during live judging whilst breaking the world record!

British female 4-way team Not For the Ordinary have been about for 4 seasons and this year, they put their heart and soul into their training with the objective of bettering their previous bronze medal from Chicago in 2016. After winning the UK Nationals by a single point, they felt confident of a podium position. It was clear that the medal positions for gold were going to be the French girls and the British for silver. NFTO took a clear 3 point average lead over the rest of the field which had 3 teams fighting it out for bronze. This makes it their 3rd competition in a row where they have scored over a 20 average and not many have made it that far.

If you haven’t heard of team Satori (or the Satori Academy), then you’ve missed the mainstay of elite level 4-way competition and coaching. Over the years, the team has changed it’s members a few times, but they have built a solid foundation of winning medals and they have over 17 wins at national level (it’s probably more, but we are not certain of the exact number dating back to Team 97). They amassed over 300 training jumps together in 2018 and came back with a 20.1 average and a tied 7th place in the 4-way open.

Under the tutelage of Gary Smith, the Qatar Falcons have done regular camps to our dropzone in Portugal preparing for the tricky Caravan aircraft. What was a surprise when they arrived in Gold Coast, Australia, was the lack of an outside float rail. They adapted well and put their training into good effect taking the bronze medal and a new national 17-point average record.

Over the last few years, the Qatar Tigers have been making steady progress up the leaderboard and they continued to do so at this world champs too. They too took a national average and a solid 4th place with 234 points. Here’s a video of their incredible 53 in time which we believe is also a national record for most points on a single skydive.

At the UK Nationals 2017, it was evident that MicroClim8 had decided to go big. With 3 new team members last year and an equalling of the UK record of 14 points in time, it was obvious, this was the best 8-way team the UK had ever had since it all began way back in 1976 with team Symbiosis if you remember them. Ironically, one of the landing area golf buggy drivers in Gold Coast was also at that competition! This year, MicroClim8 did 2 camps at Skydive Algarve and 5 at Weembi wind tunnel. They knew that their closest rivals were the Qataris and they too had been training hard. Previously, the best place the team had taken was a 4th place and that was at a World Cup, not a World Championships.

They can hold their heads high after taking 4th place again and 2 national records as well – an incredible 21 points in round 6 and a 15.2 average. Watch that impressive round 6 below:

In addition, one of the team, Phil Hartree moved into the camera slot for the first time. Filming 8-way at such a high level is no easy job and he did an amazing job considering all he had to hold onto was a small stump on the camera-step! That’s something no one had been able to train for.

Next up is team Volosity made up of Jamie Arnold and videographer, Dan Guest. This year, they had been working with Will Penny, a previous freestyle world champion. They worked extensively on not only creating an original routine this year, but being consistent too with only a 0.3 variance in their 5 free routines. Jamie had also worked hard on tidying up his body position and this really showed. Well done to Volosity who took a well-deserved silver medal and did their country proud!

Last up is team FSU who are made up of experienced artistics competitor Dave Pacey and performer Alabama Shanker. Only aged 19, she is the youngest of the team GB squad and together they placed 11th overall. The Freestyle Unicorns show great promise for the future with their drive and talent.

Want to start your own competition journey?

Then come visit our dropzone, get coached, take part in our competitions. We offer competitive team jump rates and all of our dropzones, which include Skydive Spain and Skydive Algarve, have classrooms available for private team training, briefing and debriefing. Coming up, we have 6way FS, Speed Start & Accuracy on the 10/11th November!